On the 5th October 1938, a young religious by the name of Sister Faustina (Helen Kowalska) died in a convent of the Congregation of Sisters of Our Lady of Mercy in Krakow, Poland. Having been born into a very poor farming family, Sister Faustina received only basic education, and so, on entering the convent, she was assigned the most humble and lowly tasks, usually in the kitchen or the vegetable garden.

On the 22nd February 1931, however, she began to experience visions of Christ in prayer. She wrote of her first vision in a diary: ‘In the evening, when I was in my cell, I became aware of the Lord Jesus clothed in a white garment. 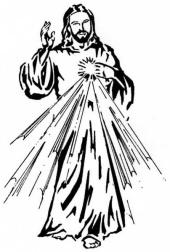 One hand was raised in blessing; the other was touching the garment at the breast. From the opening of the garment at the breast there came two large rays, one red and the other pale. In silence I gazed intently at the Lord; my soul was overwhelmed with fear, but also with great joy. After a while Jesus said to me, “paint an image according to the pattern you see, with the inscription: ‘Jesus, I trust in you.’”

In another vision Jesus explained the image to her: ‘The pale ray stands for the water which makes souls righteous; the red stands for the blood which is the life of souls. These two rays issue forth for the depths of my tender mercy at that time when my agonising heart was opened by a lance on the cross…fortunate is the one who will dwell in their shelter, for the just hand of God shall not lay hold of him.’ Today is Divine Mercy Sunday, and through the intercession of St. Faustina we ask for th grace to plumb the depths of God’s mercy and love. 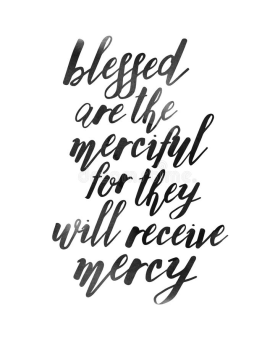 Pope Francis has made God’s mercy almost a motif of his pontificate. He has transformed the noun ‘mercy’ into a verb, explaining that by receiving God’s love, we are ‘mercyed’, and in showing God’s mercy to others, we mercy. ‘Mercy’, then, is our watchword. Are we merciful as our Father in heaven is merciful?